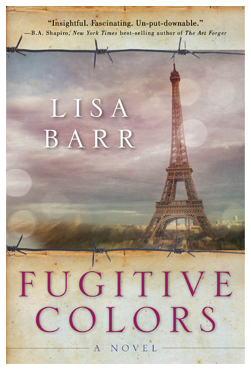 FUGITIVE COLORS asks the reader: How far would YOU go for your passion? Would you kill for it, steal for it, or go to any length to protect it?

Hitler’s War begins with the ruthless destruction of the avant-garde, but there is one young painter who refuses to succumb. An accidental spy, Julian Klein, an idealistic American artist, leaves behind his religious upbringing for the artistic freedom of Paris in the early 1930s. Upon arriving in the “City of Light” Julian meets a young German artist, Felix Von Bredow, whose larger-than-life personality overshadows his inferior artistic ability, and the handsome and gifted artist René Levi, whose colossal talent will later serve to destroy him. The trio becomes inseparable until two women get in the way — the immensely talented artist Adrienne, Rene’s girlfriend with whom Julian secretly falls in love, and the stunning artist’s model Charlotte, a prostitute-muse, who manages to bring great men down to their knees.

Artistic and romantic jealousies abound as the characters play out their passions against the backdrop of the Nazis rise to power. Twists and turns, destruction and obsession, loss and hope, captivate the reader on a journey from Chicago to Paris, Berlin to New York. With passionate strokes of compelling prose, Barr proves that while paintings have a canvas, passion has a face and that once exposed, the haunting images will linger long after you have closed the book.

Listen to an excerpt of Fugitive Colors:

B. A. Shapiro, New York Times bestselling author of The Art Forger

Masterfully conceived and crafted, Barr’s dazzling debut novel has it all: passion and jealousy, intrigue and danger.

Lisa Barr paints with vivid prose the grim setting and dire choices of the era to create a haunting tapestry of human heroism and sacrifice that is truly unforgettable.

As a historical novel, Fugitive Colors offers a fascinating account of the Nazis attempt to ‘purify’ art (when they weren’t busy purifying the population). As an epic thriller, former Jerusalem Post editor Barr’s fiction debut keeps the pages turning by killing off the good guys and steadily upping the evil.

Lisa Barr succeeds in drawing attention to a tragedy of the human condition whose ramifications are still shuddering through the vaults of high art. This novel is an important and engrossing tale that kept this reader burning a late candle.

Raoul Peter Mongilardi, producer, director, and author of “Next to the Gods” series

Written in bold and emotive strokes like the Expressionist painters and modern artists the novel tributes, one can’t help but be deeply moved by this arresting and driving drama. Told with heart and precision, one is drawn into the Parisian and German art world at the onset of World War II.

Fugitive Colors is a thrilling page-turner with twists and turns at every step.

Columnist for the New York Times

Lisa Barr asks the question: What is the value of art? Her answers take us on an exciting roller-coaster ride we won’t forget.

New York Times bestselling author of Come to the Edge: A Love Story

Lisa Barr’s well-crafted novel is nearly impossible to put down. The passion and pain the characters experience is beautifully evident and practically sings from the pages. Graphic and disturbing in places, Fugitive Colors is a book about love, friendship, jealousy, betrayal, and the things that give people a passion for life. Highly recommended for fans of historical fiction, this book is haunting, and will stick with the reader for some time.

Well-written and engaging, Lisa Barr has provided a specific look into one area of the Nazi movement and how it affected the painters of that time ... Follow Julian’s story as he discovers the perils of being a Jewish Expressionist painter during World War II and just how far he will go to protect art, and his friends.

I read this World War II novel about the Nazis’ pursuit of modern artists in three days and felt a sense of suspense from scene to scene. I honestly couldn’t put it down and would have read it in one day if I didn’t have to attend to my family!

I could not put this book down! Lisa Barr takes readers behind the scenes as the Nazis begin eliminating artists and ‘degenerates’ prior to World War ll. Her characters, Julian, Rene, Felix, Adrienne, and Charlotte come to life as she paints a painful and intriguing story of love, life, and loss.

Period melodrama that will appeal to those who enjoy art or are receptive to a new take on Nazi Germany.

There a lot of Holocaust books written lately but this one is in a class by itself, character driven and a believable story line that could very well have happened. Hitler and his Nazis were cruel and inhuman people and it is always heartbreaking to read about the atrocities committed against a race of people. I thoroughly enjoyed this book, the writing is very descriptive and enables the reader to almost be there. I love historical fiction and this time frame is especially interesting. I would highly recommend this book. I loved it!

Fugitive Colors is the best book I’ve read in a long, long time.

Author of Free Gift With Purchase

Like a great painting, Lisa Barr’s book has combined skill and imagination to explore various profound concepts in their myriad colors.

Author of Turn Left at the Trojan Horse

Lisa Barr’s writing is mesmerizing, her palette of words is as colorful and energetic as the art and the artists she envisions.

Author of Pictures of the Past

The suspense and thrill make this a quick, can’t-put-it-down book and establish Barr, a journalist for more than twenty years, as a bona fide novelist.

Mixing romance and horror, history and imagination, high art and double- dealing artifice, Lisa Barr has fashioned a dynamic page-turner of young artists caught up in the Nazis rise to power and their leaders’ attempted control over the definition, sanctioning and purposes of art...Fugitive Colors has a cinematic feel.”

Professor emeritus of English at the United States Naval Academy, and Special to the Jewish News of Sarasota-Manatee

Fugitive Colors became a fascinating and frightening history lesson for me...It is rare that I read a book twice. However, Fugitive Colors is one of those rare finds that is worthy of a second read.

Sinister one moment and uplifting the next. All the twists and turns and sex and violence; I was totally hooked ... like Sarah’s Key but so much better.

Contributor to the Wall Street Journal

The book is fabulous. It is full of excitement plus so much information about art and World War II. It is a must-read for all.

Powerful pacing, well-developed characters, expert twists of the plot, and the capacity to effectively convey genuine human and artistic sensibilities informed by in-depth period research result in a book that is hard to put down.

Barr’s book reads like a sweeping epic film, a nail-biting, on-the-edge-of-your-seat thriller, a cinematic tour-de-force in brilliant literary form . . . a story that mixes the deep sadness and isolation of a van Gogh painting with the uplifting love and joy of a Monet.